Priscilla Queen of the Desert - Musical Theatre is back 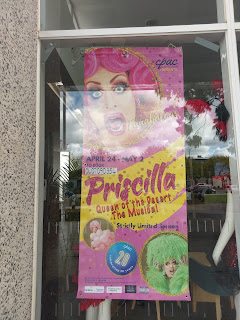 After many long months musical theatre is BACK.

Priscilla Queen of the Desert The Musical; what can l say.  I have never seen so many sequins in my life. The costuming was stunning with sequins, boas,  flounces and feathers all gleaming under excellent lighting with mirrored disco balls up high and lights flashing and flying across the stage.

This is community theatre alive and beating again. Take a bow CPAC Musical Theatre Group. After 18 long months you have staged a wonderful production of Priscilla Queen of the Desert. The standard of singing was superb. Special mention goes to the 3 Divas played by Stephanie Haigh, Nicola Downie and Jessie Rawlins. All 3 were in fine voice and harmonised beautifully.

Scott Hill, Blair Salmon and Jason McMurry took the 3 main roles and all gave good performances as did the cast as a whole. All were helped by the live orchestra led by Musical Director Ben Heels. There were some sound issues but they were minor and did not detract from the show. This is the first CPAC show i've seen but it won't be the last.

Would l recommend this show, yes l would. It's glitz and glamour with laughter and pathos all brought together by the cast and crew of  CPAC Musical Theatre Company. You can see the hard work that's gone into this show and l am so glad it's back.

Priscilla Queen of the Desert The Musical playing at Cardinia Cultural Centre Pakenham. 7 shows only April 24 - May 2.

Be quick to get your tickets.